05.24.2020
Written by Aline Nanko Samaké
Translated by Thomas Desdouits
Modern slavery covers a wide range of situations. Any condition in which a person is exploited without being able to leave or quit can fall under this denomination, whether through threats, violence, coercion, lies or abuse of power. The phrase therefore encompasses practices similar to slavery, such as forced marriage and labor or human trafficking. In 2018, 71% of the victims of modern slavery were women and girls[1]Walk Free Foundation, The Global Slavery Index – 2018, 2018
28.7 million women and girls are subjected to servitude
Women and girls are specifically affected by modern slavery. Gender disparities are characteristic of migration schemes and working environments, making sex-specific ratios variable for every category of exploitation. As a matter of fact, the exploitation of women is particularly evident in private sector industries such as domestic labor, sex work and forced marriage[2]International Labour Office,Global estimates of modern slavery: forced labour and forced marriage, Geneva, ILO, 2017. 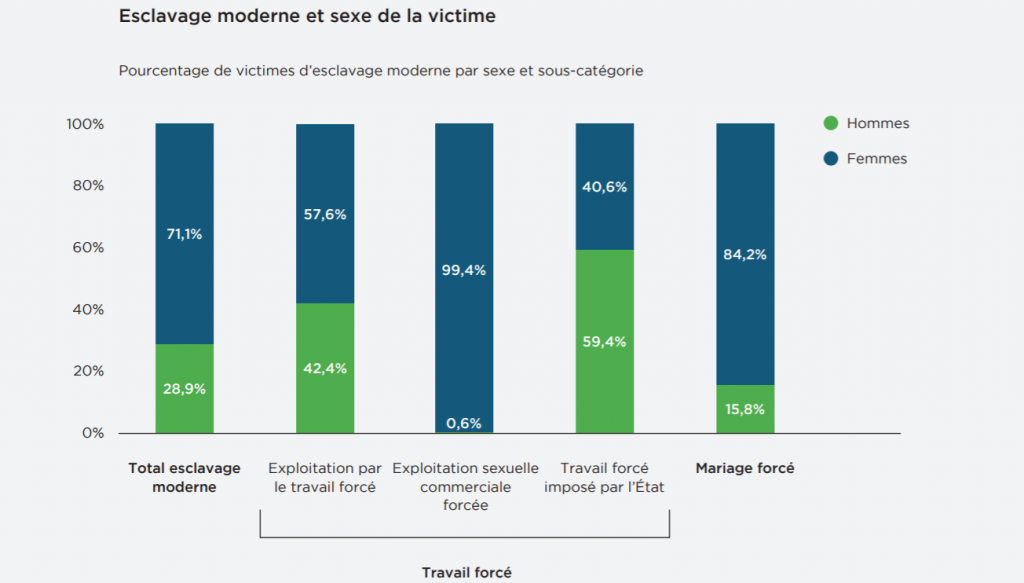 Homosexuality and politics in the Western world

The Place of Intersectionality in American TV Shows : Diversity in the universe of Shondaland 1/3

An Intersectional Analysis of Sexual and Gender-Based Violence in the Regional Conflict in the Great Lakes Region of Africa since 1994: The Eastern Democratic Republic of Congo (2/2)

Discrimination and gender inequalities in Africa: what about equality between women and men?

‘Bride’ Trafficking at the Sino-Burmese Border: A feminist critique of the traditional security approach to human trafficking

admin-dev 28 May 2021
We use cookies on our website to give you the most relevant experience by remembering your preferences and repeat visits. By clicking “Accept All”, you consent to the use of ALL the cookies. However, you may visit "Cookie Settings" to provide a controlled consent.
Cookie SettingsAccept All
Manage consent

This website uses cookies to improve your experience while you navigate through the website. Out of these, the cookies that are categorized as necessary are stored on your browser as they are essential for the working of basic functionalities of the website. We also use third-party cookies that help us analyze and understand how you use this website. These cookies will be stored in your browser only with your consent. You also have the option to opt-out of these cookies. But opting out of some of these cookies may affect your browsing experience.
Necessary Always Enabled
Necessary cookies are absolutely essential for the website to function properly. These cookies ensure basic functionalities and security features of the website, anonymously.
Functional
Functional cookies help to perform certain functionalities like sharing the content of the website on social media platforms, collect feedbacks, and other third-party features.
Performance
Performance cookies are used to understand and analyze the key performance indexes of the website which helps in delivering a better user experience for the visitors.
Analytics
Analytical cookies are used to understand how visitors interact with the website. These cookies help provide information on metrics the number of visitors, bounce rate, traffic source, etc.
Advertisement
Advertisement cookies are used to provide visitors with relevant ads and marketing campaigns. These cookies track visitors across websites and collect information to provide customized ads.
Others
Other uncategorized cookies are those that are being analyzed and have not been classified into a category as yet.
SAVE & ACCEPT