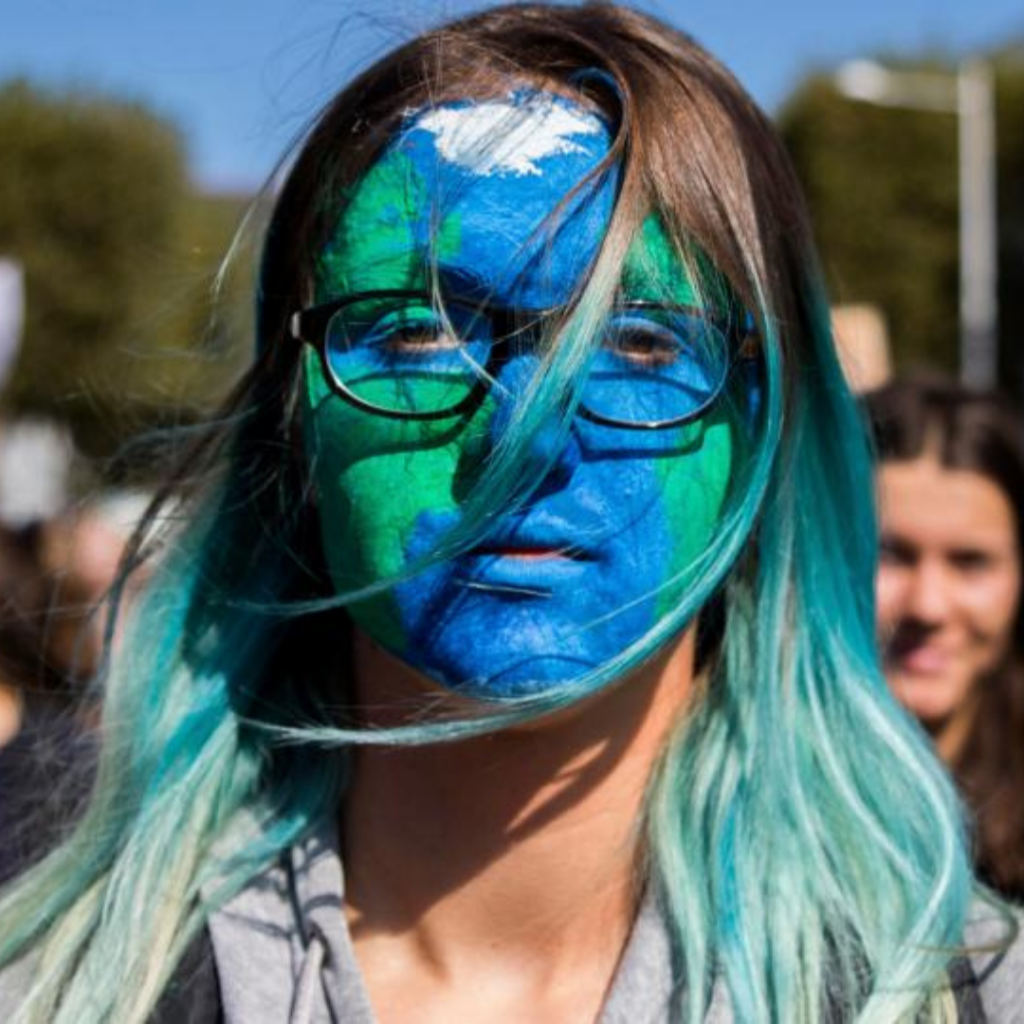 At a time when the dysfunctions of the dominant Western thought are questioned in the socio-economic and political fields; at a time when audacious reflections on “after COVID” are flourishing, ecofeminist theories could be powerful tools for better understanding how to live together. The issue is not only ethical and political, but also social. To think about a peaceful, inclusive and sustainable post-COVID humanity, it is essential to understand, then deconstruct, the oppressive shackles of the Euro-North American system – western-centric, andro-centric, anthropocentric – that is currently dominant. Moreover, in the light of the French presidential elections of 2022, the enthusiasm for ecofeminist theories is also the sign of significant changes at work in the field of political ecology, as well as in that of feminist thought.

In this sense, the need to think of what is “after” COVID arises and imposes itself in this article: can we move towards a new, more peaceful, more inclusive and more sustainable world? How can ecofeminist theories inspire us to understand how to live together?

Before considering the possible solutions, it is important to put the theory into context. Theorized in the 1970s, but practiced long before in certain Aboriginal communities[1]While Françoise D’Eaubonne is considered the first to have theorized “ecofeminism”, it is essential to recall the pre-existence of practices respectful of the feminine gender and … Continue reading , ecofeminist movements are the fruit of socio-ecological issues. Beyond purely utopian theoretical thoughts, their foundations are based on realities: the intersection of the links between exploitation, appropriation and male domination[2]We are referring here to the toxic attributes of hegemonic masculinity. over the environment, animals, the female gender, and human bodies[3]Vielle, Pascale et Alain Henry. « L’écoféminisme, une perspective pour penser la crise de notre système? », Sociétés en Changement, (9), 8, 2020 ; Plumwoods, Val. Feminism and the … Continue reading . Besides the intersection of multiple dominations resides a deeper critique: the prevalence of oppressions that would allow us to understand the systemic links that Western societies produce and reproduce. Today, ecofeminist theories are real tools at the service of activist movements with the aim of updating the ways of doing and thinking. They are an invitation to act and think differently.

Inspired by the claims of the feminist group Mujeres Creando[5] Mujeres Creando, who opposed opposed the construction of a highway that would pass through the Amazonian forest in the Bolivia of Evo Morales, the leitmotif “Neither Women nor the Earth are territories of conquest[6]The original leitmotif is, in Spanish: “Ni las mujeres ni la tierra somos territorios de conquista! “. On this subject, see the documentary directed by Marine Allard, Lucie Assemat, Coline … Continue reading ” resonates today in ecofeminist demands, and questions the oppression of genders in the era that geologists and biologists call “anthropocene[7]The Age that geologists and biologists call “Anthropocene” (Paul Crutzen and Eugene Stoermer) means “the Age of the human”. This corresponds to the idea that humans have become the main … Continue reading ”.

Beyond the local claim stricto sensu, the slogan is revealing of current ecofeminist movements: the primary thesis of ecofeminists affirms the existence of a systemic link between the overexploitation of resources, pollution, the mass extinction of species, global warming on the one hand, and gender oppressions on the other[8]Plumwood, Val, “Ecofeminism: An overview and discussion of positions and arguments”.1986, Australasian Journal of Philosophy, 64(sup1), 120-138 ; Plumwood, Val, Feminism and the Mastery of … Continue reading . By searching the deep roots, we see equivalences between the relationships between the feminine and masculine genders and human/nature as well as analogous mechanisms implemented such as objectification, devaluation, violence, etc.

In this sense, ecofeminism(s)[9]Ecofeminism(s) have been noted in the plural in this article for inclusive purposes so as to include all ecofeminist movements, thoughts and theories. This postulate thus believes in the plurality of … Continue reading defend the intersection of two main struggles: the patriarchy and capitalism that structure modern Western thought. The association identified by ecofeminism(s) between patriarchy and capitalism, however, is not monofocal. Other close connections capable of accounting for a broader intersection of oppressions and dominations can exist and bring together – without universalizing – the systemic phenomena within what Jeanne Burgart Goutal calls a “matrix of domination[s][10]Burgart Goutal, Jeanne, “Déconstruire le « carno-phallogocentrisme » : l’écoféminisme comme critique de la rationalité occidentale”, 2016, Université de Paris IV-Sorbonne, 11(1). ”.

This “matrix of domination[s]” would be assimilated to a broader thesis of ecofeminism(s) which would make it possible to understand the systemic links of oppressions. Said thesis also makes it possible to demonstrate that the connection between the different relations of domination – in this case on the female gender and on nature – resides essentially in their oppressive characteristics. According to the author’s understanding[11]Wohlschies, Romane, “Écoféminismes : outils pour penser l’humanité post-COVID”, Institut du Genre en Géopolitique, 2022. of the analysis of ecofeminists; the bodies, the Earth and the territories are appropriated and dominated in a transversal way by multiple systems of oppression and domination such as patriarchy, capitalism, colonialism, heterosexism, racism and speciesism.

The binarity of the modern attitude as it crystallizes in the vision of the capitalist and imperial world, which grasps the world in two distinct and hierarchical poles, must be highlighted. This Western philosophical tradition is based on the model of an impermeable heteropatriarchal division between qualities, roles, attributes, values, said to be “masculine” or “feminine”: reason versus emotions, mind versus body or matter, public sphere against the private sphere, science against spirituality or experience… However, while the feminine genders are referred to nature, emotions, fragility; on the other side of the spectrum, the male genders are associated with rationality, reason, virility and must only according to quantitative rules and the maximum search for profit imposed by capitalism. Simone de Beauvoir has already mentioned this by emphasizing the dualisms that animate Western thought: the devaluation and domination of the feminine genders go hand in hand with the overvaluation granted to reason and to the masculine genders[12]Simone De Beauvoir, Le deuxième sexe. Gallimard, 1949. . In the analytical continuity of the dualisms that characterize Western thought, Karen J. Warren sees the stages of a more global logic of domination: the distinction between two totally opposed entities, the hierarchization of one being deemed superior to the other, and finally, the subordination or exploitation of one person over another[13]Karen J. Warren, “The power and the promise of ecological feminism”, 1998 [1990], Environmental Philosophy. From Animal Rights to Radical Ecology, M. Zimmerman ed., p. 325-345..

In this sense, by pointing out the interconnections between the matrices of domination, ecofeminists question oppressive systems as a whole, without erasing the singularity of the experiences of oppression lived by each human being. By putting words to the evils of society, they invite us to maintain a critical mind on our ways of acting, thinking, and consuming, as well as in our ways of considering our relationships with humans. and with nature. Thus, ecofeminist ideas are intended to be tools indicative of struggles, a set of practices with a concrete and immediate emancipatory aim, rather than utopian theories detached from reality[14]Burgart Goutal, Jeanne, Être écoféministe, théories et pratiques. Edition de l’Échappée, 2020, p. 128. . With reference to philosophers Val Plumwood and Vandana Shiva, dwelling on the question of how ecofeminist practices are changing our perceptions and our conceptualization of the world and the society around us in the light of post -COVID period encourages us to go further in our ways of thinking, expressing, acting and feeling. Ecofeminism(s) is about going beyond fundamental dualisms, and placing the concepts of diversity, inclusiveness and plurivocity at the heart of our thoughts and practices[15]Descola, Philippe, Par-delà nature et culture, Éditions Gallimard, 2005. .

The COVID-19 pandemic has brought to light the dysfunctions of dominant Western thought, and in particular concerning the ethics of care. The care sector indeed responds mainly to the attributes and qualities associated with the female genders, the “care for” and the “care about” the Other implied by the Western system of thoughts. In this respect, ecofeminism(s) intend to give a central place to the values of care, to the relationship to emotions in the management of relations with the living, with nature, and more broadly in the promotion of life. The approach thus proposes a model of behavior that challenges the conception of a selfish and rational individual who would be selfish and rational – the homo economicus – dominating in capitalist thought.

Far from a new reductive essentialism which is often reproached to ecofeminist thoughts, and which would enhance the belief in a feminine role and the land “naturally” oriented towards the reproduction of life, food and care; the ethics of care , as tackled by ecofeminists, calls for a new vision of the world that would connect distinct beings in their individualities, while questioning the contemporary organization of social reproduction: repairing the world so that the living can live there in a logic of support for life[16]Larrère, Catherine, La nature a-t-elle un genre? Variétés d´écoféminisme, Ed L´Harmattan, Cahiers du Genre, 2015/2 No. 59, pp 103-125. En ligne : … Continue reading , that is the ambition of ecofeminists. In a political reflection, “it is unlikely that the ecological challenges of today and tomorrow will be able to give birth to an ethical reflection on the means of inhabiting the world[17]Tissot, Damien, « Le Souci de la nature. Écoféminismes et éthiques du care. », 67 Multitudes 67, 2017: <https://www.multitudes.net/le-souci-de-la-nature-ecofeminismes-et-ethiques-du-care/>. ” – which means to also take care of those who inhabit it.

Ecofeminisms make it possible to question the logic of “power-over” and the Western specificity of dichotomous classifications. Opposing relations of domination is our right of freedom and survival, but also and above all a need to create a system that does not participate in social divisions, the extermination of the living and the oppression of bodies and the Earth. Building a model for the systemic explanation of relations of domination does not amount to erasing their multiplicity and their diversity. It is not only a question of radically questioning the binaries evoked, but also of approaching nature and feminisms by taking into account a plurality of knowledge and practices.

Once understood, the challenge remains to manage to get rid of it. Ecofeminists believe in the need to transform social relations, the organization of work and the exercise of power through the promotion of knowledge, practices, feelings and values culturally considered as feminine; but of which the male genders could just as much carry.

This is therefore a call not only to disrupt the socio-political and economic organization of relations between genders, species and cultures, but also to create alternative ways of thinking, expressing, acting and feeling.

Merchants Carolyn, The Death of Nature: Woman, Ecology and the Scientific Revolution, Harper and Row, 1980.

Plumwoods Val, Feminism and the Mastery of Nature, Routledge, 1993.

The views expressed in this paper are solely those of the author.

Space conquest : female figures in the shadow of a male narrative

Hegemonic Masculinity : between deconstruction and a resurgence

COP26 : A closer look at the progress made on gender

admin_bis 25 March 2022
We use cookies on our website to give you the most relevant experience by remembering your preferences and repeat visits. By clicking “Accept All”, you consent to the use of ALL the cookies. However, you may visit "Cookie Settings" to provide a controlled consent.
Cookie SettingsAccept All
Manage consent