Lack of parity in the digital world : still a hot topic. 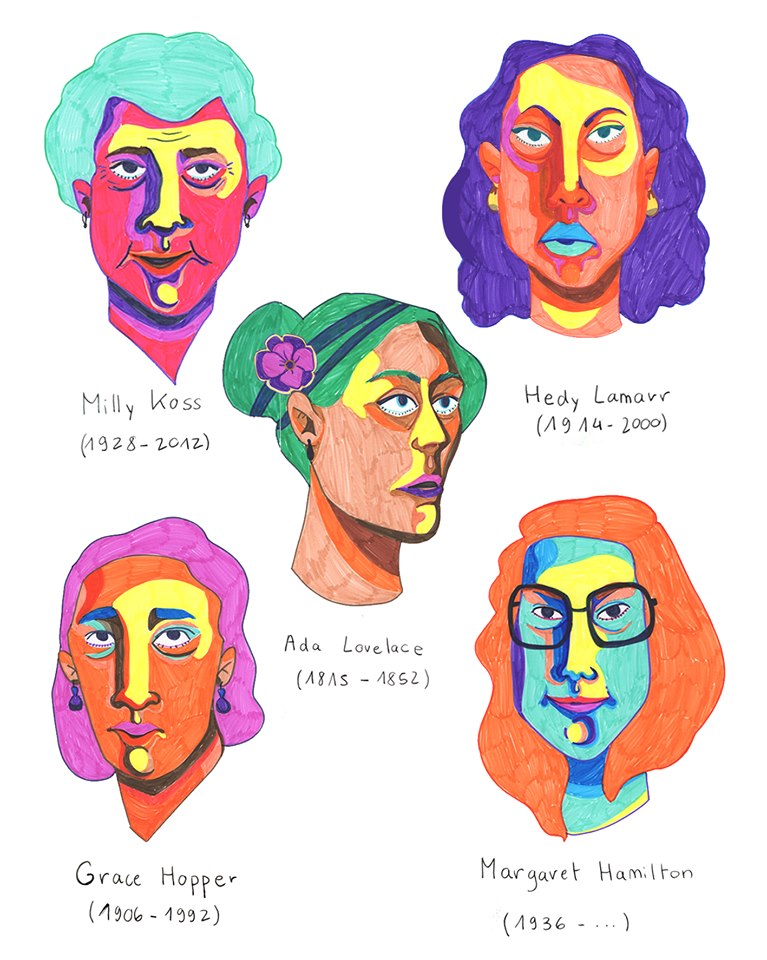 The lack of gender equality in the digital industry is not news. However, the issue still sparks debate as it doesn’t seem to resolve, unlike the IT field in India or Malaysia for instance. Despite a consensus that the innovation field needs diversity to be efficient, no tangible efforts were made to reverse the trend. The world of tomorrow will be digital, and it is vital that women take part in its creation.

Despite popular belief, we also owe women for digital innovations

women are pioneer in computer sciences since the 18th century. Here’s a few example : Ada Lovelace wrote the first algorithm; Hedy Lamarr created a high frequency radio system that became the WI-FI; and the women team led by Jean Bartik programed the supercomputer ENIAC and then worked on the UNIVAC (the first commercial computer), moreover every member of the team has left a legacy.

During the 19th century, until the first half of the 20th century, programming was a women’s job. “Computers” (human calculators) were very present at Harvard, Bletchley Park and Nasa. Their work led to numerous advances in the fields of space engineering and computing. And we cannot forget Margaret Hamilton who made the Apollo mission possible.

It is estimated that, in the 60’s, women represented 30% to 50% of the workforce. Often relayed to “computers” job, most of them conducted a tedious – yet necessary – work, that men didn’t want to do. Only a few women were promoted, and they were paid less than their male counterparts.

Progressively, these “computers” made it through to the creation of new programs and new tools. Milly Koss, with her colleague Grace Hopper, developed the first compiler; Susan Kara worked with Steve Jobs on the Macintosh’s design.

Why are there so few women in the world of technology and computing ?

Several hypothesis may explain this precipitous decline. First of all, the introduction of computers into the household. The end of the 1980s marks the beginning of the microcomputer and the PC :  these disruptive innovations were marketed to men, then, with the development of videogames, to boys. Society’s image of computing shifted, it’s no longer an unglamorous female tertiary sector, but a male career.

The dropout of female students would be explained by that male craze : having used a computer before at home, they had an advantage over many of their female classmates. This gap, without school coaching, pushed many women to switch studies.

Thereafter, the fact that IT professions were mostly occupied by men, discouraged girls and further polarized their career choices. The standardization of computers in households allowed the creation of “boys club”, notably in video games. It is still relevant to this day. According to the association Women in Games, half of video games’ players are women, yet there is only 14% of women in development teams. This shortage would be due to the misogynistic hostility that they’re facing, when working (e.g. Gamergate) or when playing (the release of many footages and testimonies of women being harassed during online games on a regular basis).

Silicon Valley is not really women-friendly either. Numerous female workers recount at best an unintentional oversight due to the male majority in the office, at worst deliberate exclusion of gatherings or sexual harassment in the workplace. According to a study conducted by Emily Zhang for her book “Brotopia”, decadent parties where investors and renowned entrepreneurs meet are closed to many women. Female entrepreneurs also face inequality in the funding department. On average, they get half as much fundings as male entrepreneurs.

What could reduce this lack of representation ?

The lack of diversity hinders innovation. So many women have the originality and the skills to take part in the conception of new products or to perfect existing projects. As explained in this article written by Deborah Rouach, AI is only a biased perception of the society and its players, a sexist perception. Neutrality in technology can not be achieved when only privileged white men create it.

It is thus necessary to sensitize executives and diversify teams by recruiting more women. But that’s not enough. From their earliest age, girls are diverted from IT and computer sciences. To have any hope of achieving a parity, the challenges would be : an equal access to computers and trainings as of primary school, a fight against gender division of labour, and the end of sexism in digital fields.
Simply put, a change in people’s mentalities.

EVANS Claire L., «Broad Band, The Untold story of the women who made the Internet», New York, Portfolio/Penguin, 2018

To quote this article : Apostoly Alice, “Lack of parity in the digital world : still a hot topic.”, 21.04.2020, Gender in Geopolitics Institute.

Covid-19 : A threat to women's rights everywhere - How does the pandemic increase gender inequality ?