To what extent does organized crime illustrate the gender dimension of the Mexican society?

The status of women is often badly perceived around the world. Many of them are oppressed, even in the most developed countries. This is a direct consequence of male chauvinism and misogyny. In all countries, lack of education, the power of religious dogmas and strong family and historical traditions nourish and strengthen male chauvinism in societies. In many countries, this situation does not evolve and urges women to look after themselves.

Thus, the issue of the status of women in modern, capitalists and patriarchal societies is now a key topic in research. There is a society in particular where this topic is relevant in a way that interests us: it is in a Latin society, in Mexico, in a society struck by the scourge of organized crime. Therefore, we are going to look at how organized crime provides information on the evolution of the status of women and on the gendered character of the Mexican society.

The status of women in the Mexican society

Poverty and violence against women remain the most widespread scourges all over the world. Latin America, especially Mexico, is not an exception. Women are most affected by social inequalities and must face a patriarchal system that is both a pillar and a product of the Mexican social organization.

The lack of access to education consolidates women’s domestic role. Indeed, in their lifetime, they are in turn girls, mothers, wives, and maids. But the problem of education is just one of many challenges in Mexico and it represents well the situation at a national level. The lack of coordination between national and international legislations regarding women’s rights, the challenges to access medical services (sexually transmitted infections, pregnancy, childbirth, abortion), brutality in a family environment, low political participation and the continuity of institutions behind gender inequalities that reproduce traditional stereotypes are problems that Mexican women have to face.

The fact that women are confined to a domestic role highlights the obstacles they face daily. After all, they are the first victims of a catholic, male chauvinist, violent, southern society.

The Mexican patriarchal State was built with the belief that men are the faces of humanity, the subjects and the actors of public activity, those who exercise power, dominate and reign cruelly against women who fight but are denied the right to be seen as full-fledged subjects of law. Therefore, a male chauvinist and conservative society, with a close-minded Church, a growing poverty, and an unprecedented impunity, makes Mexico a fertile ground for violence against women.

Consequently, in a war-like environment like the one in Mexico, violence against women is multiplying in the most abject forms. Indeed, for about twenty years, Mexico began a war against corruption, drug trafficking, and the narco-State[1]. As a result, cartels have decided to declare war on the people. However, in times of war, women’s body is a territory that must be conquered, muzzled and subdued.

Women’s murders are often crueler than men’s: their bodies are mutilated and chopped. Men rape women, then murder them, or alternatively cartels abduct them, force them into prostitution and kill them after many months, or even years, of exploitation. This is primarily the case in the North of the country, at the border with the United States, where many Americans practice sex tourism at low cost and where the presence of maquiladoras[2] promotes the immigration of poor women looking for a job, which make them easy targets. The famous city Ciudad Juárez, renamed “murder capital of the world”[3] by the press, is a textbook case regarding violence against women.

In such societies, where there are so many inequalities, so much poverty, a strong patriarchy, and where women must provide for their families, it is the perfect recruiting ground for crime. Women are a part of, as such, massively recruited populations by organized crime. Thus, amid a structural lack of opportunities such as access to employment or to education, many native, migrant, or low-income women choose to engage in criminal activities to support themselves.

Indeed, the sense of belonging, the need for security and resources, underemployment, or even drug addiction push women to join organized crime groups, such as cartels. Women in cartels are used to transport drugs, launder money and sometimes to commit murders. Few have been able to climb the ladder. Women who are recruited can also be victims of sex slavery, a “business” largely controlled by cartels.

To recruit or threaten, cartels play with the very precarious situations of families, especially of women. These women, these mothers have the will to save their family and are therefore ready to risk everything. However, for cartels, if they come to be arrested or to die, these women are only collateral damage of their activities.

As for women who end up caught in the nets of prostitution, cartels have a habit of kidnapping them in order to exploit them. Indeed, Mexico is a country known for human trafficking for purposes of sexual exploitation and forced labor[4]. The district of Merced, in the center of the capital city, is the first place in Latin America for underage prostitution: 80% are young girls, which 50% are less than eighteen years old and are from Central America.

Despite a patriarchy that covers all cultural, social, economic, and political aspects within the Mexican society and organized crime, we noticed, these past twenty years, a feminization of organized crime. However, it would be wrong to think that the rising of women – when it occurs – is recent. Indeed, two women shaped the history of drugs in the first half of the twentieth century: La Nacha and Lola la Chata.

Ignacia Jasso, known as “La Nacha” was the first to establish actions and strategies that big drug cartels continue to use today. She was the “first drug dealer” of the country to compete for a place in this business and to export drugs on a large scale. La Nacha was the first to create a transnational Mexican cartel.

The second woman who shaped the history of drugs is María Dolores Estévez Zuleta, known by the name of Lola la Chata. She is one of the main traffickers of marijuana, morphine, and heroin in Mexico, from the 1930s to 1950s. La Chata is a worthy representative and pioneer of emerging and popular demonstrations of women in drug culture. 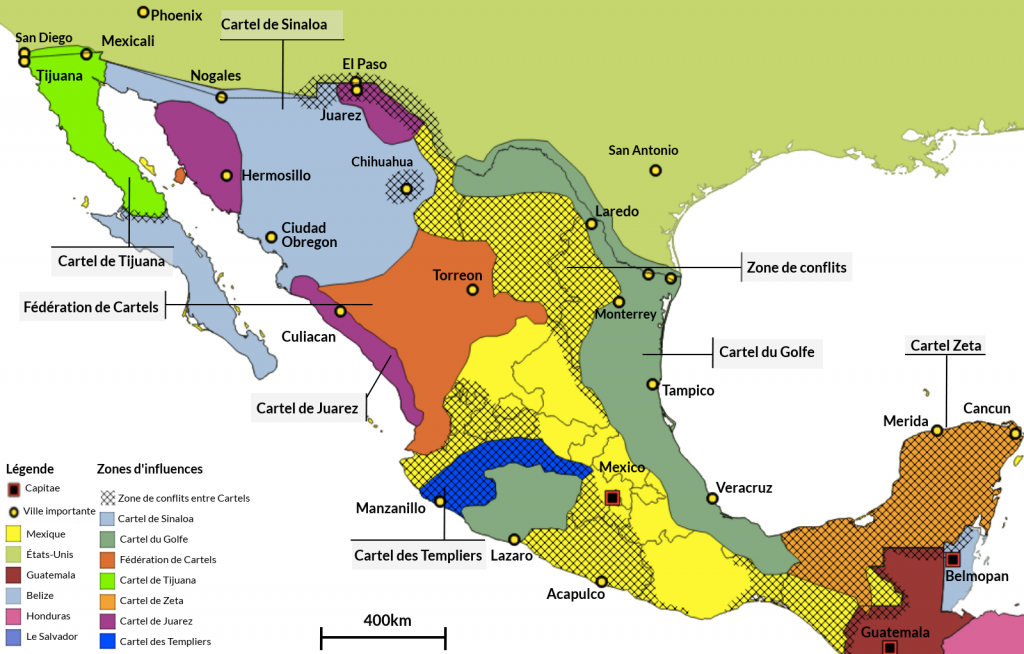 The spheres of influence of Mexican cartels [5]

Despite the awareness of Mexican women, and the support received from charities and organizations, there is no real progress in Mexico. In spite of this, it may be noted that in 2017, the city of Mexico has installed in the subway penis seats reserved to men. These seats aim at denouncing sexual harassment. The idea was to make the trip as embarrassing and unpleasant as possible in order to show to harassers that no one likes to feel some stranger’s genitals against its butt or thigh in the subway [7].

This campaign against sexual harassment reflects a reality greater than what the Mexican government makes it seem. That is the paradox that persists in Latin America within consecutive governments – and within organized crime. Latin American countries, since 2000, have experienced a feminization of politics, in particular with many women elected president : in Chili, Michelle Bachelet ; in Costa Rica, Laura Chinchilla; in Argentina, Cristina Fernandez; in Brazil, Dilma Roussef; in Nicaragua, Violeta Barros and in Panama, Mireya Moscoso.

In reality, the “strong” presence of women in politics is more symbolic than anything else, especially since the latter do not profoundly transform their societies. Indeed, the feminization of politics in the Latin American region did not yet demonstrate, through inclusion in political programs, a real improvement of women’s living conditions. Female politicians at the head of Latin American States do not represent a real progress for the struggles for women’s rights.

Within organized crime, the situation is comparable. Female drug barons and other women in positions of power are not participating to any improvement: violence in Mexico caused by cartels is unprecedented and patriarchy remains a major pillar of cartels’ organization. Moreover, this war against drugs which started in 2006 by former president Calderon provoked in fifteen years an increase of 85% of femicides. Therefore, this crisis promoted impunity for criminals and has increased the violence of cartels – whether a woman is the leader or not – especially towards women whose body became a territory that must be conquered.

– UNODC, « Global report on trafficking in persons », 2018, available on : https://www.unodc.org/documents/data-and-analysis/glotip/2018/GLOTiP_2018_BOOK_web_small.pdf

To quote this article : Julie LAVAIRE, “To what extent does organized crime illustrate the gender dimension of the Mexican society ?”, 11.09.2020, Gender in Geopolitics Institute.