Joe Biden’s Election to the U.S. Presidency: What Prospects for Women’s Sexual and Reproductive Rights in Sub-Saharan Africa?

Joe Biden's Election to the U.S. Presidency: What Prospects for Women's Sexual and Reproductive Rights in Sub-Saharan Africa?

The Mexico City Policy is a U.S. government policy to make any non-governmental organization “practicing and promoting abortion as a method of contraception in other nations1]Congressional Research Service (2001). International Family Planning: The “Mexico City’ Policy. P. 1. Available online at: https://www.everycrsreport.com/files/20010402_RL30830_c36ae9159587c6ca12d4da8edacc125b1394ce6c.pdf“.

ineligible to US funding. Born under the administration of conservative Ronald Reagan in 1984, the Mexico City Policy has since become a key issue of partisan debate in the United States, to the point where it has been regularly repealed and reinstated according to the political sensitivity of the government in power.

It has recently been the subject of strong international attention following President  Trump’s decision to reinstate it in 2017, despite the negative consequences of such a policy on the populations of developing countries. Thus, in the aftermath of the U.S. presidential election that unofficially favored Democratic candidate Joe Biden, many observers hope and see in this transfer of power the end of restrictive “pro-life” policies2]Since 1973, the “pro-life” movement in the United States has been campaigning for the right to life and against the right to abortion. Its supporters support the idea that human life begins at conception and that access to abortion constitutes a deprivation of life (source: Parke, C. (2020). What does “pro-life” mean? Fox News. Online: https://www.foxnews.com/us/pro-life-anti-abortion-movement-rights-roe-wade)”.

This article seeks to explain the impact of such an anti-abortion policy on the work of NGOs in the sub-Saharan African region, and then to analyze the impact of the upcoming presidential handover on improving the sexual and reproductive rights of African women.

A brief history of the Mexico City Policy, from Ronald Reagan to Donald Trump

At the 1984 International Population Conference in Mexico City, the United States announced its draft policy prohibiting U.S.-funded NGOs from providing abortion-related services in other countries or advocating for abortion rights3]Open Society Foundations (2019). What Is The Global Gag Rule? Site de l’Open Society Foundation. Online: https://www.opensocietyfoundations.org/explainers/what-global-gag-rule. Critics of this position have dubbed it the Global Gag Rule. The policy took effect the following year thanks to Ronald Reagan, a Republican politician considered an icon US in conservative circles. The Policy has faced several legal challenges that have had the effect of slightly restricting its scope. In this case, DKT International v. USAID and Alliance for Open Society International v. USAID established that the “gag order” would apply only to foreign NGOs and would have no effect on American organizations4]Crimm, Nina J. (2007). The Global Gag Rule: Undermining National Interests by Doing unto Foreign Women and NGOs What Cannot Be Done at Home. Cornell International Law Journal, volume 40, issue 3, p. 621.

The President’s decision marks the divide between the Democratic and Republican parties regarding women’s reproductive and sexual rights and U.S. foreign aid policy. It is therefore customary for Democratic presidents to revoke the Mexico City Policy and for Republican presidents to reinstate it, usually within days of taking office.

For instance, it was restored on January 22, 2001 by George W. Bush, who believed that “taxpayers’ money should not be used to pay for abortions or to defend or actively promote abortion at home or abroad6]Bush, G. W. (2001). Memorandum For The Administrator Of The United States Agency For International Development. The White House. Online: https://georgewbush-whitehouse.archives.gov/news/releases/20010123-5.html“.

On top of returning the provisions of the Global Gag Rule, the Trump administration also expanded the provisions of this policy and renamed it “Protecting Life in Global Health Assistance” (PLGHA). Donald Trump has distinguished himself by his support for the “pro-life” movement in an America strongly divided by political, economic and social issues. We recall that he was the first incumbent president to speak at the March For Life anti-abortion rally in Washington DC, where he continued to assert his commitment to protecting the “unborn child” through a series of regulations and opposition to any legislation that ran counter to the pro-life ideology7]Trump, D. (2020). Remarks by President Trump at the 47th Annual March for Life. The White House. Onlinee: https://www.whitehouse.gov/briefings-statements/remarks-president-trump-47th-annual-march-life/“.

These actions are also in line with the “America First” doctrine put forward by the President, who preaches the allocation of taxpayers’ money to spending on national priorities rather than adhering to openness to the world.  In addition, Donald Trump signed the Geneva Consensus Statement in October 2020, which affirms that the right to abortion is non-existent and that the protection of life begins before birth. Under the PLGHA, an expanded version of the Mexico City Policy, Donald Trump also withdrew aid to international organizations providing support to abortion-rights NGOs, even if the funding for these projects does not come directly from US funds.

To what extent does the Global Gag Rule influence the sexual and reproductive rights of women in developing countries, particularly in sub-Saharan Africa?

According to the WHO, 3 out of 4 abortions in Africa and Latin America are performed under unsafe conditions, with higher risks in sub-Saharan Africa8]OMS (2020) Preventing unsafe abortion. Site de l’OMS. Online : https://www.who.int/news-room/fact-sheets/detail/preventing-unsafe-abortion. Indeed, according to the same source, African women account for 62% of deaths caused by complications from unsafe abortion worldwide. With the exception of South Africa, Cape Verde and Mozambique, the practice of abortion remains prohibited or subject to strict regulations in the rest of the sub-Saharan zone. In addition to legal restrictions, access to safe abortion is also compromised by lack of financial resources, lack of adequate medical facilities, lack of information and education, and the stigma associated with sexuality and abortion9]Advocates For Youth (2011). Les jeunes et l’avortement non médicalisé: situation mondiale. Online: https://www.advocatesforyouth.org/wp-content/uploads/storage//advfy/documents/youth_and_unsafe_abortion_french.pdf.

The Marie Stopes International (MSI) example perfectly illustrates the impact of the Global Gag Rule on health NGOs operations. MSI is one of the major organizations specializing in family planning and safe abortion and is present in 17 countries in sub-Saharan Africa10]Marie Stopes International (s.d.). Where we work. Site de MSI. Online: https://www.msichoices.org/where-we-work/. It broke its partnership with USAID following the return of the Global Gag Rule in 2017, choosing not to be “gagged” by the United States. This decision resulted in a $50 million drop in revenue over the next two years and a subsequent reduction in the services provided: in Madagascar, for example, nearly 170,000 women in precarious situations lost access to the free family planning program; in Uganda, teams providing care in rural areas were demobilized, and in Zimbabwe, half of the MSI clinics in the country were closed11]Marie Stopes International (2019). House Of Representatives Votes To Repeal Global Gag Rule – So What Next? Marie Stopes International’s website. Online: https://www.mariestopes.org/news/2019/6/house-of-representatives-votes-to-repeal-global-gag-rule-so-what-next/ – altogether jeopardizing the access of millions of Africans to important information and support structures for birth control.

Since contraception is a “substitute good” for abortion according to an economic perspective raised by a study by the Lancet Global Health, the drastic reduction in family planning services has the harmful effect of increasing unsafe abortions in low-income countries, as shown in this graph12]Brooks, N., Bendavid, E., Miller, G. (2019). USA aid policy and induced abortion in sub-Saharan Africa: an analysis of the Mexico City Policy. The Lancet Global Health. Online: https://www.thelancet.com/journals/langlo/article/PIIS2214-109X(19)30267-0/fulltext. 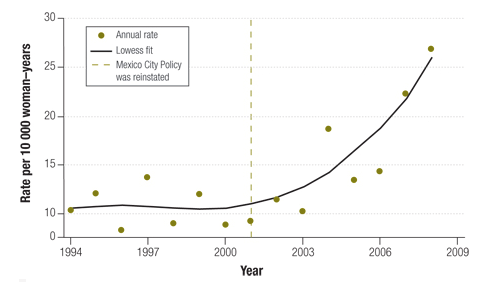 If the Mexico City Policy dates back to the 1980s, what makes Donald Trump’s tenure more problematic and his positions more controversial? As in previous Republican presidencies, health services in Africa face a difficult choice: to give up providing access to abortion and receive U.S. assistance, or to continue the service and have to abandon or overcharge for other services to compensate for the loss of funding. However, the scope of the consequences is unprecedented because of the more radical approach taken toward health organizations.

In 2017, the government ceases to contribute financially to UNFPA’s regular programs. Such a withdrawal represents a funding gap of more than $30 million per year for this UN agency present in more than 150 countries14]UNFPA (2019). United States of America. UNFPA’s website. Online: https://www.unfpa.org/fr/node/16998.

In addition, the policy not only affects NGO initiatives related to abortion and family planning, but also reduces the funds available for the fight against malnutrition, malaria, tuberculosis and AIDS.

The Global HER Act and Democratic Hope

The “gag” imposed by President Donald Trump on USAID’s NGO partners and its exacerbated impact in low-income regions is strongly criticized in both developing countries and the United States. In 2019, the Global HER Act is introduced in the U.S. Congress to definitively reverse the Global Gag Rule and thus prevent its return by future administrations. Given the inflexibility of the current government on the subject, the election of Joe Biden to the U.S. presidency rekindles the hopes of “pro-choice”15]In opposition to the “pro-life” movement, the “pro-choice” movement advocates the right of women to choose and access abortion in safe conditions.” movements regarding the passage of this law.

His political circle supports this position: Senator and Vice President-elect Kamala Harris also affirmed her support for the “pro-choice” cause and particularly for the Global HER Act: “The United States should never force non-governmental organizations to choose between receiving aid and providing comprehensive reproductive care to women around the world. I am proud to join my colleagues in this effort to permanently repeal the harmful Global Gag Rule19]Secular Coalition For America (2019). Senator Kamala Harris On The Global Gag Rule. Secular Coalition For America Website. Online: https://secular.org/2019/05/senator-kamala-harris-on-the-global-gag-rule/“.

As a result, following the model of previous Democratic presidencies, President-elect Joe Biden could revoke the Mexico City Policy within the first few days of his inauguration. Other figures in the president-elect’s entourage also seem open to U.S. support for family planning and reproductive health programs around the world. In 2016, Dr. Jill Biden – wife of the Vice President – made visits to the African continent to keep the discussion on girls’ education and women’s empowerment alive. Among other things, she visited a Marie Stopes International clinic in Niamey, Niger, to learn about the barriers women face in accessing contraception and reproductive care20]The White House (2016). Dr. Jill Biden Travels To Niamey, Niger To Highlight Girls’ Education And Women’s Empowerment. The White House. Online: https://obamawhitehouse.archives.gov/the-press-office/2016/07/21/dr-jill-biden-travels-niamey-niger-highlight-girls-education-and-womens.

Through an analysis of U.S. aid policy through the lens of women’s sexual and reproductive rights, we see that the health and lives of millions of African women remain heavily dependent on partisan debates in developed countries. The situation is paradoxical, inasmuch as this aid can contribute to development and push for good governance in Southern societies, while at the same time placing a sword of Damocles to destroy efforts already underway.

The solution is to get rid of funding from foreign donors, even if this strategy is immediately subject to several pitfalls. For example, in sub-Saharan Africa, the majority of states continue to maintain very strict abortion laws, making it difficult for NGOs to access local public subsidies. Making abortion a paid service to cover costs is not an option either: very often, in the absence of social protection, medical costs are paid by the patient herself and some care remains unaffordable for the majority of the population.

Because of its involvement in more than 80 percent of population policy assistance in Africa, U.S. aid has become a “hard-to-replace source of funding21]Bolomey, J. (2017). L’Afrique en quête de nouvelles aides après le décret anti-avortement de Donald Trump. Le Monde. Online: https://www.lemonde.fr/afrique/article/2017/02/01/l-afrique-en-quete-de-nouvelles-aides-apres-le-decret-anti-avortement-de-donald-trump_5072807_3212.html“. The rejoicing of women’s rights advocates around the world following the election of a Democratic president in the United States thus demonstrates the drift of Western imperialism and the need for the African continent to take control of its development.

To cite this article: Koloina R. Andriamanondehibe, “Joe Biden’s Election to the U.S. Presidency: What Prospects for Women’s Sexual and Reproductive Rights in Sub-Saharan Africa?”, 26.11.2020, Gender in Geopolitics Institute