Since its creation and until the middle of the 20th century, the University remained a territory almost unanimously masculine. Its counterpart, the research field has followed the same tendency. However, since few decades we observe a progressive feminization in these sectors, as can be observed in society as a whole: professions are de-gendered. This is a real underlying trend, which cannot be denied, even if the process is sometimes complicated and subject to resistance. We witness in France, especially since the last years, the institutional will to establish parity in the teaching and research professions become stronger.

Nevertheless, in a study published in the Quantitative Science Studies[1] Lare Watson, “Women less likely to win major research awards”, Nature, 13/09/21, https://www.nature.com/articles/d41586-021-02497-4., Lockhman Meho, specialist in information science at the American University of Beirut, demonstrates that this recent equilibrium is not translated, neither in the international level nor in prestigious awards, nor in the prominent places of the signatures of a publication.

More than a century following the first Nobel Prize of Marie Curie, how can we interpret this disequilibrium? To what mechanism does it echo? Through an inventory that is both historical and factual, this article suggests to deconstruct our vision of “Man of Science” by concentrating on the gender distribution of scientific prizes in France and in Europe[2]EHNE, Encyclopédie numérique d’Europe, Université de la Sorbonne,https://ehne.fr/fr/encyclopedie/th%C3%A9matiques/%C3%A9ducation-et … Continue reading.

Since the genesis of our civilization, the access to scientific knowledge has been preserved to an almost-exclusive masculine elite. So much so that Françoise Héritier, a renowned anthropologist from the 20th century, considers the deprivation of knowledge as one of the tools to subordinate women[3]Françoise Héritier, Michelle Perrot, Sylviane Agacinski, Nicole Bacharan, « La Plus Belle Histoire des Femmes », 2011, p30..

However, it was not until very recently that girls’ access to education has become a dominant subject in the history of feminism. The access to universities is hard-won, in the second half of the 19th century. In France, 16th august 1861, Julie Daubié is the first woman to obtain her baccalaureate, she is 37 years old. She is going to be followed by Emma Chenu in 1863, who becomes then the first female graduate in 1868[4] Mathilde Larrère, “Rage against the machismo”, 2020, p. 68.. The diplomas were gendered in the masculine, it is said that the minister Jules Simon has himself replaced the Mr. by Ms.[5]Ibid  In Europe, it is globally around this period that women fill for the first time the University benches, except in Germany where it is necessary to wait until the 20th century[6]EHNE, Encyclopédie numérique d’Europe, Université de la Sorbonne, … Continue reading.

If studying proves to be difficult for women, teaching is even more so. In a recent tribute to her grand-mother[7]Agnès Schermann-Legionnet, Simon Paye, et Anne Loison. « Chapitre 13. Les carrières des chercheuses et chercheur·euses en écologie : une comparaison France-Norvège », Sexe & genre. De la … Continue reading, the grand-daughter of Marie Skłodowska-Curie relates an anecdote that perfectly illustrates the level of ambient misogyny in the beginning of the 20th century, at the University as elsewhere.  When her husband, Pierre, has died of a road accident in 1906, the co-laureate of the 1903 Nobel Prize in Physics has retaken the physics classes that he was giving at the Sorbonne. At the time of her inaugural lesson, a journalist published the following lines: “ It is [..] a big feminist victory that we celebrate in this day. Because, if the woman is permitted to teach higher education to students of both sexes, where will be then the alleged superiority of the male man? In reality, I tell you: the time is near where women will become human beings[8]Ibid”. He will thus consecrate, before the time, a powerful definition of feminism, whose identity of the author could not be verified: feminism is the radical idea that the woman is a human being.

Scientific awards and publications: an unequal distribution of honors

Although teaching and research professions are increasingly mixed in France or abroad, we are still far from parity, as the following graph shows. There is a widening gap when we compare the female workforce and the share of women rewarded for their work. 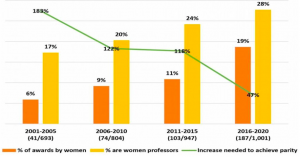 Graph 1: Comparative evolution of the feminization of university professors with that of scientific prizes between 2001 and 2020 internationally. (https://direct.mit.edu/qss/article/2/3/976/103157/The-gender-gap-in-highly-prestigious- international)

On the international level, women represent, always according to the study by Lokman Meho[9]Lokman I. Meho, « The gender gap in highly prestigious international research awards, 2001–2020 », Quantitative Science Studies 2021, 2 (3), pp. 976–989. doi: … Continue reading, around 20% of the scientific awards’ laureates even though they are a little less than third of the professors. If we can see a regular evolution of the number of women laureates of scientific prizes over the last twenty years, the increase of this percentage remains very low: although there should have been an increase of 47% of the prizes won by women to reach parity, it only increased by 13%. It should be noted, nevertheless, that the percentage of women winners of prestigious awards has jumped between 2016 and today, an 8% increase, is more than the last fifteen years.

However, the gendered distributions are not always the same according to the disciplines. We acknowledge a good evolution in biology, but, in mathematics and computer science, the increase in the number of laureates remains low. In fact, in the few scientific prizes that haven’t had yet any female laureates, we find the award Maryam Mirzakhani in mathematics or the award of Queen Elizabeth for engineering sciences. We can hope this change rapidly thanks to the political will of the institutions to recognize the female workforce[10]Ministère de l’enseignement supérieur, de l’innovation & de la recherche ,“Vers l’égalité femmes-hommes ? : chiffres clés [2019]”, … Continue reading.

The change that is mentioned in the field of biology has been confirmed; in situ, by the interview of 2 researchers in France, one is a research director and the other an old director of a biology institute. If, 5 years from now, there are as many, if not more, new female researchers than new male researchers in the life sciences, the so-called “hard” sciences remain male bastions in France[11]Dea Lorenzini, Entretien de la directrice de recherche à l’INSERM de Luminy, Marseille, Laboratoire de neurologie, Novembre 2021.

A gendered distribution by sector since the bachelor degree

An unequal distribution between males and females is visible since the first years of science studies[12]Lokman I. Meho, « The gender gap in highly prestigious international research awards, 2001–2020 », Quantitative Science Studies 2021, 2 (3), pp. 976–989. doi: https://doi.org/10.1162/qss_a_00148. Already in the bachelor’s degree, there is a notable difference in numbers between the two genders in the sciences: while women are in the majority, at university, in the natural and life sciences sector (61.2% of women in 2017)[13]See graph 2, they became a minority in basic and applied sciences. A gap that is found in the preparatory classes for the Grandes Ecoles: 70% boys for 30% girls[14]Ministère de l’enseignement supérieur, de l’innovation & de la recherche ,“Vers l’égalité femmes-hommes ? : chiffres clés [2019]”, … Continue reading. 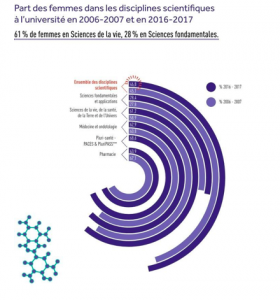 Graph 2: Women’s share in the scientific disciplines at the University in 2006-2007 and in 2016-2017(Document Minister of Higher Education, of innovation and of the research, parity, the key numbers, 2019)

To explain this phenomenon, it would seem that there is a gender assignment in the appetite for science from an early age[15] UNESCO, « Déchiffrer le code: l’éducation des filles et des femmes aux sciences, technologie, ingénierie et mathématiques (STEM) », :https://fr.unesco.org/STEMed.. Among others, the gender stereotypes in the fields of sciences, technology, engineering and mathematics that lead to auto-selection biases. In fact, these subjects being considered as masculine, girls will tend to automatically consider that they have no place there, even that they are not able to carry out higher studies in this field. Furthermore, the interest that the students give to a certain subject more than another is highly correlated to a feeling of belonging and a form of self-evaluation of their abilities in the subject. So that if a faculty is assigned to the male gender, the girls will have less possibilities to project themselves as succeeding in this subject.

This disparity necessarily affects the appearance of the names of the different authors in the publication of articles. The supervisors surveyed for this article confirmed to us that the names cited in first or last place among the authors have been the most visible. But women are less present than men[18]Ministère de l’enseignement supérieur, de l’innovation & de la recherche ,“Vers l’égalité femmes-hommes ? : chiffres clés [2019]”, … Continue reading.

Always according to the interviewed research professionals, the order of names in a publication is normalized according to international rules. It is done according to, firstly, the involvement of researchers in the project, the first names being those of the most important contributors (often thesis students), followed by the names of occasional contributors, and then the names of research directors and/or institute. This phenomenon partly explains a raised fact in the study of Lokhman Meho[19]Lokman I. Meho, « The gender gap in highly prestigious international research awards, 2001–2020 », Quantitative Science Studies 2021, 2 (3), pp. 976–989. doi: https://doi.org/10.1162/qss_a_00148: there are less women named in a last position in publications, simply because fewer of them are research or/and institute directors.

The inventory of the recognition of female abilities in science should not blind us to the progress of recent years. Today, young girls are more and more present in long and demanding faculties, even if they still have difficulties finding places in engineering and computer science schools. There is a still long way to go to reach parity, and for this, we have to be the motors, each, for a major change in the representation of these disciplines.

The place of intersectionality in U.S. TV series: what progress has been made in the representation of latinx and queer characters? 3/3

Ivory Coast : the feminism put to the test

Looking Back One Year After the Generation Equality Forum : Which posterity?

Space conquest : female figures in the shadow of a male narrative

Cyberactivism: a mobilizing force that is revolutionizing female activist commitment

Lack of parity in the digital world : still a hot topic.

admin-dev 21 April 2020
We use cookies on our website to give you the most relevant experience by remembering your preferences and repeat visits. By clicking “Accept All”, you consent to the use of ALL the cookies. However, you may visit "Cookie Settings" to provide a controlled consent.
Cookie SettingsAccept All
Manage consent